Six Flags’ Day of the Dead 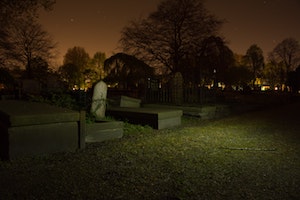 The theme park and the sarcophagus

As part of a Halloween-themed promotion, the amusement park company offered prizes to contestants willing to lay in (above-ground) coffins for 30 hours straight.

According to Six Flags, response to the promotion was overwhelming: Thousands of people were dying for the opportunity, effectively burying the company in applications. Originally brewed up for Six Flags’ St. Louis park only, the “Coffin Challenge” boxed 90 bodies at 15 theme parks across North America on Saturday, Oct. 13.

Starting at 1 p.m., the contestants were “laid to rest” in rows of wooden coffins within mock cemeteries. Six Flags raised them “from the dead” at 7 p.m. the next day. Six Flags then awarded each “undead” contestant with a cauldron of treats, including two season passes, two haunted house tickets, and $300.

They also got to keep their coffins.

To win the prizes, challengers had to stay in their coffins for all 30 hours, with the exception of scheduled bathroom breaks. Contestants had to bring their own pillows and blankets, but Six Flags provided food and occasional visits from the “Fright Fest Freaks,” a motley crew of clowns, mangled zombies, and creepy folks with chainsaws.

Just imagine the scene: A foggy night. Six coffins in a row, each holding a living body. A bloody scientist stumbles from a gang of zombies toward them…Suddenly, a hand shoots from the coffin!

“Excuse me? Yeah, my phone isn’t charging. Is there something wrong with this outlet?”

Who were the people participating in this contest? One was Stevi Rogers, a self-described “vampire enthusiast intrigued by the legends and lifestyle, especially their use of coffins to aid in their eternal rest.” She made it all 30 hours.

The vampires would be proud.

Check out Rogers’ video about the challenge here.