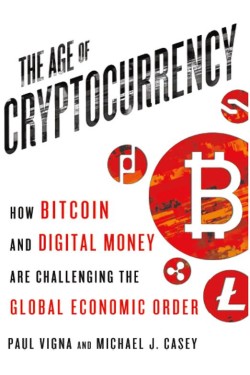 Washington D.C. (April 23, 2015) – On Wednesday evening, Consumers’ Research hosted Michael Casey and Paul Vigna, authors of “The Age of Cryptocurrency.” The evening began with an introduction from Edmund C. Moy, the 38th Director of the U.S. Mint. Director Moy shared his unique perspective on the origins of money from his experience as one of the few people who has actually “made” money.

Jerry Brito, the Executive Director of Coin Center, led authors in a discussion of their book and bitcoin’s place in the financial ecosystem. Topics that were discussed included:

The evening’s program concluded with remarks from Joe Colangelo, Executive Director of Consumers’ Research. Once the official program concluded, the authors signed copies of their book at the subsequent cocktail reception. The event was held at the Ringgold-Carroll House. Built in 1825, the house is home to the Diplomatic and Consular Officers Retired (DACOR) organization as well as Consumers’ Research.
In attendance were members of the bitcoin community, regulators, government employees from a variety of agencies, venture capitalists, members of the U.S. Foreign Service, IMF, World Bank, and many more.

CR hopes that the event offered those who attended an overview of the book as well as bitcoin’s evolving role in the financial technology sector. Thanks to all who came out to support the event and to Ed Moy, Jerry Brito, Michael Casey, and Paul Vigna for making it such a success.