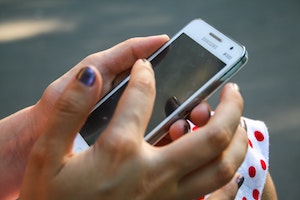 Palm, the brand famous for personal digital assistants, has been resurrected by a San Francisco startup. Backed by NBA star Stephen Curry, the new Palm is selling a smaller, stripped-down smartphone as a companion to customers’ primary smartphones.

“Designed for life on the go,” one advertisement says, “Palm is an ultra-mobile product that syncs with your smartphone to keep you connected but not consumed.”

Available exclusively on Verizon’s network, the Palm phone will be offered as an add-on phone to pre-existing phone plans. Using Verizon’s NumberShare feature, customers will be able to add their contacts to the Palm devices and use them as extensions to their regular smartphones.

In practice, the Palm phone works similarly to an Apple Watch, though without the wristband.

With a 3.3-inch display, making it roughly the size of a credit card, the small device is being marketed as a way for consumers to minimize their screen usage. The Palm phone is large enough to make calls and answer text messages. It also has a camera and runs apps from the Google Play store.

In theory, its small screen size will keep users off their phones and attentive to the world around them, while still connecting them to essentials like navigation and music streaming apps.

In this spirit, the Palm phone has a feature called “Life Mode,” through which users can quickly turn off notifications from all apps (exception apps can be flagged in the phone’s settings).

With a minimalist design, the Palm phone resembles a mini iPhone X. The Palm phone uses a USB-C port for charging and does not have a headphone jack. Gorilla Glass 3 on both the front and back protect the device from water and dust.

While the Palm phone can connect to both Android and iOS devices, certain Apple staples like iMessage and Facetime will not be compatible with the Palm phone.

Palm phones will go on sale exclusively through Verizon in November starting at $350. Besides the initial price tag, Verizon will also charge users of the Palm phone a $10 monthly data fee.