Out With the New, In With the Old 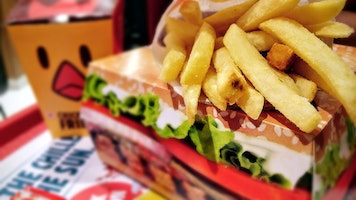 The nation’s fast-food chains are moving into a “gray area” — Senior citizens are replacing the industry’s traditionally teenaged workforce.

According to the Bureau of Labor Statistics, the number of working 16- to 24-year-olds is expected to shrink by 1.4 percent between 2014 and 2024. Working 65- to 74-year-olds, meanwhile, are expected to grow as a group by 4.5 percent over that same time period.

Recruiting at the retirement center, or something like that

As fewer teens get jobs, restaurant recruiters are focusing their efforts on senior centers, churches, and the AARP, Bloomberg reports. The “order” that served up this trend seems to have included a tight job market with a side of high life expectancy and light retirement savings.  “People skills” for today’s teenagers seem to have been left off the menu, an additional reason fast food chains are choosing to hire seniors.

Another factor may be simple demographics: In both relative and absolute terms, there are more elderly folks than there used to be. The United States Census Bureau reports that, for the first time in U.S. history, senior citizens will soon outnumber young people. It estimates that by 2035, the number of people over age 65 will surpass the number of those under age 18.

Buick, Metamucil, and butterscotch candy companies should all be thrilled.

A history of hiring older folks

The story “Fast-food chains seeking seniors” has made national headlines in the past. In December 1987—or, as some might say, “Back in the day”—The New York Times reported on fast-food chains recruiting seniors to shore up a shortage of teen labor. At the time, McDonald’s had recently started a “McMasters” training program.

Stevenson Williams, a 63-year-old retired construction worker, manages a Church’s Chicken in South Carolina. He told Bloomberg that he loves the atmosphere and social interaction of his work but noted that some of his younger co-workers require lessons in customer relations.

“[T]hey can be very disrespectful,” he said. “So you have to coach them and tell them this is your job, this is not the street.”

If all seniors working at fast food joints are as conscious of customer service as Williams, this trend might be a net benefit to consumers. Just be sure to speak up when you place your order—you know, for the old timers’ sake.