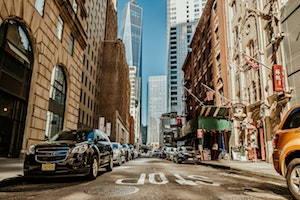 New York City will impose a minimum wage for ridesharing app drivers, a move that Uber and Lyft say will raise ride prices.

On Dec. 4, New York City’s Taxi and Limousine Commission (TLC) passed a minimum wage of $17.22 per hour for all rideshare drivers. New York, the United States’ most lucrative ridesharing market, is the first city to create a minimum-pay floor for the industry and could serve as a model for other cities.

New York consumers will pay higher rates due to the new wage rule, according to representatives from both Uber and Lyft.

“The TLC’s implementation of the City Council’s legislation to increase driver earnings,” Jason Post, Uber’s director of public affairs, told Business Insider, “will lead to higher than necessary fare increases for riders while missing an opportunity to deal with congestion in Manhattan’s central business district.”

The system used to calculate the wage increase uses a per-trip formula, which critics say will encourage drivers to prioritize short rides within Manhattan and disregard rides in the other boroughs.

“Unfortunately,” Lyft said in a statement to Business Insider, “the TLC’s proposed pay rules will undermine competition by allowing certain companies to pay drivers lower wages, and disincentives drivers from giving rides to and from areas outside Manhattan. We urge the TLC to reconsider.”

The TLC said that the wage is equivalent to $15 an hour, accounting for both payroll taxes and the lack of paid time off. The changes also include an “out-of-town” rate for driving outside the city’s borders and a “shared ride” bonus for carpool rides.

The minimum pay floor is expected to increase the average ridesharing driver’s annual pay by nearly $10,000.

In a statement to CNN, Jim Conigliaro Jr., an advocate for ridesharing drivers and founder of the Independent Drivers Guild, said the TLC’s decision sets a “new bar for contractor workers’ rights in America.” NYC driver Guillermo Foundeur told the New York Post that “this will mean less-stressed drivers on the streets, and that is good for everyone.”

TLC chair Meera Joshi said that, if it means drivers will receive a living wage, “all New Yorkers are willing to pay a little more and wait a little longer.”