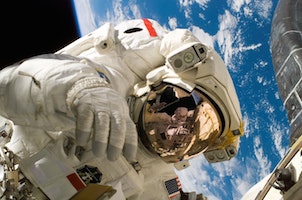 MZ’s big bucks have secured for him a voyage in the Big F***** Rocket. That’s right, SpaceX’s very own Big Falcon Rocket (BFR) will carry the brash billionaire through the stratosphere into the cold depths of space — or rather, around the moon and back.

Musk made the announcement at SpaceX’s headquarters in Hawthorne, California, live streaming the reveal through SpaceX’s YouTube channel. There he introduced a grinning Maezawa who declared, “I choose to go to the moon!”

Putting the “luna” in lunacy, Maezawa has gone beyond purchasing a single seat on the spacecraft, instead opting to buy out the entire flight as part of a project he is calling #dearMoon.

“I choose to go to the moon with artists,” said Maezawa, who hopes to inspire painters, sculptors, photographers, musicians, and others to create stellar, nay, interstellar masterpieces.

“What if Basquiat had gone to space and had seen the moon up close?” posed Maezawa. “What if Picasso had gone to the moon or Andy Warhol? Or Michael Jackson or John Lennon or Coco Chanel?”

Maezawa said he will ask six to eight artists to accompany him, but he has not yet selected the lucky creators.

For his part, Musk has different ideas about space travel.

“The reason for creating SpaceX was . . . to help advance rocket technology to the point where we could potentially become a multi-planet species and a true space-bearing civilization,” explained Musk at the event. “. . . There could be some natural event or some man-made event that ends civilization as we know it or life as we know it. So it’s important that we try to become a multi-planet civilization — extend life beyond earth — and to do so as quickly as we can.”

While Maezawa paints a picture of creative possibility, Musk apparently plans to hop on his Big Falcon Rocket to escape the burning remnants of post-apocalyptic Earth — and start anew on Mars.