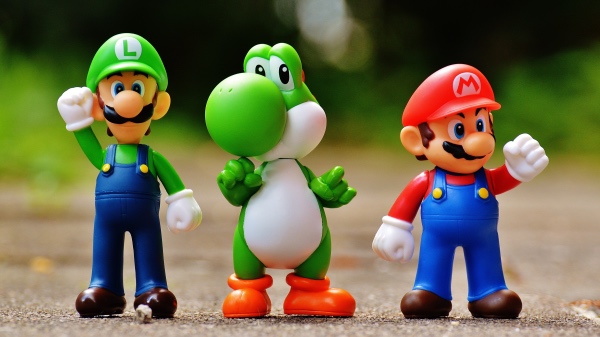 SpoNgEboB got an action figure.

That’s not a typing error. Nickelodeon is selling 8-inch figurines of some of the cartoon sponge’s most popular internet memes.

These include “Mocking Spongebob” (typically paired with text written in InTeNTioNaLly rAnDOm CAPitaliZation), “Imagination Spongebob” (the one with the rainbow?), and “Handsome Squidward” (Spongebob’s grumpy neighbor, but tall and chiseled), as well as three others.

A Little Bit of Everything

Meme fans will find the quirky 8-inch figurines on Amazon in a dedicated “Spongebob Squarepants” page. Other officially-licensed Spongebob products available for purchase include Chef Boyarde ravioli, inflatable hats, and even a self-help book (“Sponge at Heart: How to Live a Bikini Bottom Life”).

Nickelodeon’s good-natured profiting on the use of its intellectual property online stands in stark contrast to another famous company that creates content for children: Nintendo.

The comparison is a little apple to oranges — or Krusty Krab Burgers to Power-Up Mushrooms, if you will — but news of the meme figurines broke around the same time as this headline appeared online: “Nintendo Kills Super Mario Fan Port.”

Over the past seven years, a video game hobbyist developer, ZeroPaige, created a version of the original Super Mario Bros. that plays on the now ancient Commodore 64 console.

First released in 1982, the venerable C64 has been defunct for nearly 30 years. But that didn’t stop Nintendo from immediately lobbing fireballs at the Super Mario Bros. project upon its release in mid-April. The free download, playable on hardware or emulators, disappeared from a number of sites following a flurry of cease-and-desist letters.

Consider the Fate of ‘Goonies II’

To be fair, Nintendo does provide playable copies of former hits like Super Mario Bros. on new consoles through its eShop. Fans of lesser known games aren’t as lucky, however.

“The Goonies II,” of cherished memory, isn’t legally available anywhere outside the original cartridge. What happens if the last working copy wears out before a digital rerelease? Unless they use the video game black market, scrupulous consumers, otherwise willing to pay game creators for their work, could no longer enjoy the game — nor could the game’s developer collect royalties.

Nintendo’s jealous guarding of its intellectual property is, on the one hand, understandable. On the other, one wonders about the commercial threat posed by the porting of a 34-year-old video game to a 37-year-old console — and whether there exist reasonable alternatives to Nintendo’s scored-earth campaign against projects like ZeroPaige’s.

Nickelodeon, at least in regard to ridiculous Spongebob memes, has chosen a more sanguine (and entrepreneurial) approach to the internet culture of its fans.

Nintendo appears to be on another path — or, as mocking Spongebob might say, ANothEr PaTH.