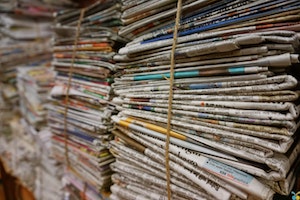 The CEO of a cloud computing firm is the latest tech executive to purchase a major news publication.

Last month, Salesforce CEO Marc Benioff and his wife purchased Time magazine for $190 million. The nearly century-old publication has struggled in recent years with declining advertising and newsstand sales. Benioff’s purchase from the Meredith Corporation represents the second sale of Time in less than a year.

Through the sale’s announcement, the Benioffs said they would not be involved with day-to-day operations or journalistic decisions of the publication. According to a text-conversation interview by The New York Times, Benioff didn’t know he was going to buy Time two weeks before the official announcement was released.

Although newspapers have struggled in recent years, many prominent figures of the technological industry are now choosing to invest in them.

Bezos said in an interview that, although the internet is an incredible asset to tech companies, it “was eroding all the advantages that local newspapers had.” The question remains whether billionaires who have made fortunes off the internet can translate their tech success to the news.

Some newspaper purchased by tech industry executives have, so far, been successes. Others have been less so.

Chris Hughes, a co-founder of Facebook, pursued an ultimately disastrous venture with The New Republic. He promised to “aggressively adapt to the newest information technologies without sacrificing [The New Republic’s] commitment to serious journalism.”

Besides making himself the editor-in-chief, Hughes renovated the office, redesigned the magazine twice, and attempted to train staffers in the use of media. However, many editors and staff members resigned due to his management style. He sunk $20 million dollars into The New Republic only to sell it four years later.

Bezos’ ownership of the Washington Post has been more successful.

He transformed the paper’s business model, focusing on gaining overall readership rather than increasing revenue per reader. Instead of capitalizing on local readership, The Washington Post is now a national and global company with increasing profits. He has said that the internet gave newspapers “the one gift of free global distribution.”

When asked about her boss’ ownership of The Washington Post, media columnist Margaret Sullivan approved, stating she prefers “the editorial content left alone and run by journalists.”