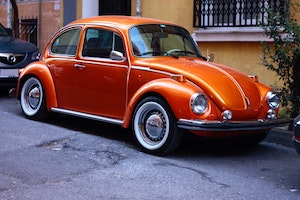 The German auto-manufacturer announced last week that, after nearly 70 years of production, it will discontinue the Beetle. Due to declining sales, Volkswagen will roll the last Bug off its production line in 2019 — to the relief of younger siblings suffering from “slug bug” wounds. (Some of you may have grown up playing this game under an inferior name: “punch buggy.”)

“The loss of the Beetle after three generations, over nearly seven decades, will evoke a host of emotions from the Beetle’s many devoted fans,” said Hinrich J. Woebcken, Volkswagen’s North America region CEO — which was, like, totally a bummer for the country’s aging hippies.

Tracing its origins to Nazi Germany, the “Love Bug” became a symbol of 1960s and 70s counter-culture. Volkswagen ceased production of the original Beetle in the 1990s, although various evolutions of the car have been in continuous production to the present day.

Volkswagen’s most recent reincarnation was the Beetle (A5). The A5 sported a sleeker, more aggressive design compared to the rattling, slightly-dopey model remembered affectionately by Baby Boomers and nostalgic tweens going through a flower child phase.

Although 2019 officially marks the end of the Beetle’s road, it remains possible that Herbie the Love Bug will ride again. Volkswagen doesn’t currently have plans to replace the iconic car, but….

The Beetle will ride off into the sunset with style. According to Volkswagen, the final 2019 models will feature push-button starts, sunroofs, tri-color ambient lighting, and stainless-steel pedal caps. Can you dig it?

We wish the Volkswagen Beetle a totally groovy farewell.