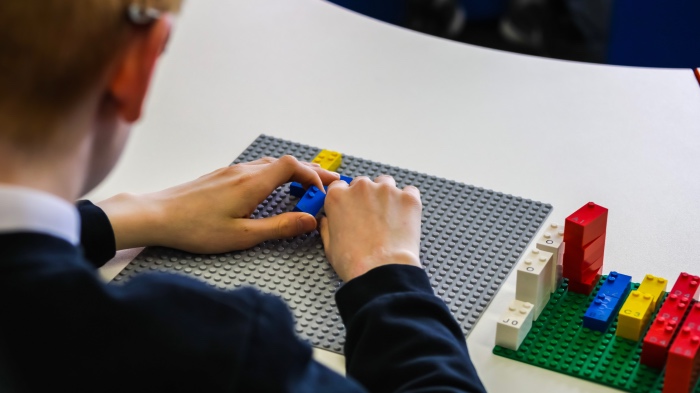 Visually-impaired children around the world will soon be learning to read Braille with a popular building-block toy.

The Lego Foundation recently announced Lego “Braille Bricks,” which children will use to build words and sentences. Lego designed the blocks specifically for the visually impaired, although they have printed letters on them, as well.

The Braille alphabet communicates letters through different combinations of raised dots on a 3×2 grid. For instance, to render “A,” the top-left dot is raised. For “B,” both the top dots are raised. And so on.

Many Lego blocks already resemble Braille letters just by the nature of their design. All four-stud square bricks, for instance, could communicate the letter “G.”

The idea for Lego Braille Bricks is that visually-impaired children will snap together words laterally across studded plates — the same kind used as “grass” or “water” in regular Lego sets.

Lego has said it hopes the new bricks will help improve low Braille literacy rates. The National Federation of the Blind reports about 10 percent of students are learning Braille in school compared to more than 50 percent in the 1950s.

Another poll — this one conducted by the American Printing House for the Blind — found that less than 8 percent of legally blind students in the U.S. use Braille as their primary reading medium.

Why the small numbers?

According to the New York Times, Braille books are expensive and bulky. A single textbook can cost $1,000. When a Boston publishing house printed the Harry Potter series in Braille, “the final product was 56 volumes, each nearly a foot tall.” By comparison, smartphones with audiobooks are much easier to lug around — and cheaper.

Lego is currently testing Braille Bricks. They are expected to launch in 2020 when Braille Brick “kits” will be distributed free-of-charge to select institutions.

“With this project, we are bringing a playful and inclusive approach to learning Braille to children,” CEO of the Lego Foundation John Goodwin said. “I hope children, parents, caregivers, teachers, and practitioners worldwide will be as excited as we are, and we can’t wait to see the positive impact.”