It’s a Ruff Time to be a Dog Lover 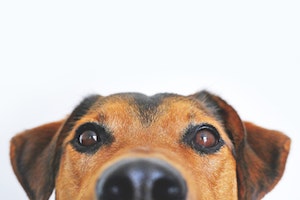 Dumb as a mutt

Before shelling out a pretty penny for the next craze in designer dogs, there’s something pup lovers ought to know: A new study shows that man’s best friend isn’t quite so extraordinary after all. Turns out, dogs aren’t all that smart.

The study, published in Learning & Behavior, compared canine cognition to that of 12 other animals with similar characteristics — that is, animals that are carnivores, social hunters, and/or domesticated pets. After stacking dogs up against cats, dolphins, chimpanzees and others in the cohort, the study’s researchers (probably “cat people”) declared dogs to be in the middle of the pack.

“Dog cognition does not look exceptional,” reported one of the study’s authors.

This news may seem far-fetched to dog people. There are, after all, notable examples of intellectually advanced pups.

There’s Chaser, a collie from Spartanburg, South Carolina, whose psychologist owner taught her to recognize the names of over one thousand objects — and then fetch them. Then there’s Mia Moore, the cockapoo who impressed Simon Cowell on America’s Got Talent by reading numbers on flashcards. And of course, there’s the story, made famous by Walt Disney, of how 101 bespeckled Dalmatian puppies outwitted a pair of dopey dog-nappers and a psychopathic fashionista (okay, that last one’s fiction).

Only the best and brightest

While the study sheds some fur/light on pet smarts (or lack thereof), it’s probably not changing anyone’s mind when it comes to choosing a pet.

But for those who want to smarten their dogs up, the American Kennel Club suggests stocking up on dog food rich in omega-3 fatty acids. And for those who want only the brightest pets, it’s time to consider moving to Nevada, Wisconsin, North Carolina, South Carolina, or Alabama — the only states that have no laws restricting exotic pet ownership.