What will the Federal Government do with Hyperloop?

Written by Joe Colangelo, Executive Director of Consumers’ Research and Steven Swan, MBA candidate at The Wharton School of Business and author of Tech By Number


Futurists and interested consumers should not be the only ones excited by the new form of transportation capable of ferrying riders at top speeds of 700mph while expending a fraction of the energy costs of super or sub-sonic air travel.  If the claims that Elon Musk has made in his outline of the Hyperloop are accurate (we will assume for the sake of this article they are) then his invention will be attractive to consumers for its ease of use and a profitable venture for the operator which will be competitive with all airlines operating between the hyperloop’s initial California hubs.

In addition to payroll and general corporate taxes, transportation-focused businesses experience a unique set of tax structures.  These include:

Airline Ticket Surcharges: As seen in the below ticket breakdown, the total cost of an airline ticket is typically between 17% and 20% comprised of government-imposed surcharges.(2) 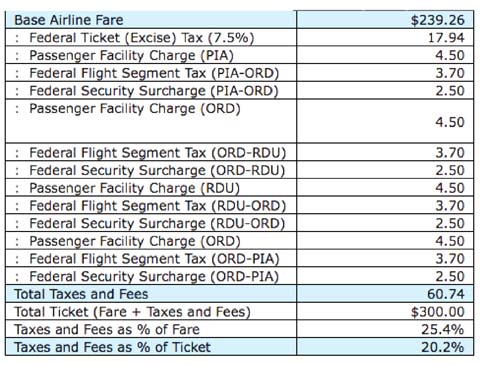 Consider the 2012 estimated operating budgets of the following federal agencies within the Department of Transportation.

How long would it take before the Federal Hyperloop Administration (FHLA) employed another 1,000 people whose salaries were paid from surcharges to riders and operators of the Hyperloop?

We’re not suggesting that Mr. Musk keep his good ideas to himself.  The world needs innovators like him if we, as he suggested, “want the future to be better than the past.”  Elon Musk didn’t wade into the practical political and administrative implementation of a Hyperloop system for good reason.  He succeeded in demonstrating that current technology and efficient design can create a solution that creates more value than the status quo.  To bring the engineering concept into reality, it is now up to the public and their elected representatives.

If politics is the art of the possible, then we must acknowledge that a Hyperloop system as imagined in the whitepaper will never happen.  Compromises will be made.  Taxes will be levied.  Powerful interests will need to be confronted.  If the stars align just right, we may see a version of the Hyperloop in the next several decades.  We would be wise to remember the simple, rational thinking of Musk’s original idea.  Too many compromises, and we may set out for a unicorn but end up with a camel.

We believe the cost, quality, availability, and variety of goods and services used or desired by consumers – from both the private and public sectors – are improved by greater consumer knowledge and freedom.

We are the oldest consumer organization in the United States, but in fulfillment of our mission we bring the newest tools to our analysis of the business and government practices that affect consumers.