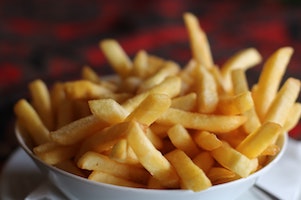 Fast-food restaurants should serve only six French fries at a time, a Harvard Professor recently told The New York Times.

Last week, Eric Rimm, professor of epidemiology and nutrition, said restaurants should limit their fry orders to a measly half-dozen — and always pair them with a side salad. If the internet’s response to Rimm’s suggestion is any indication, hell hath no fury like a French fry scorned.

Here for a good time, not a long time

Potatoes are the most consumed vegetable in the United States, the Times reported. According to the Department of Agriculture, the average American consumes 115.6 pounds of white potatoes a year, two-thirds of which come in the form of “French fries, potato chips, and other frozen or processed potato products.”

While an abundance of fried starch is great for the taste buds, it’s less kind to the body. Research published last year indicates that people who eat fried potatoes two to three times a week had a higher average mortality rate.

So far, however, scolding Americans with such studies hasn’t done much to reduce their spud intake, a situation Rimm acknowledges. “It’s too bad,” he told the Times, “in this country you’ll pry them from my cold dead hands.”

Fry lovers of the world united, condemning and mocking Rimm’s prescription on Twitter.

@Phil_Sanchez said eateries would serve only six French fries — if they were located in Hell. Another Twitter user called the prospect “torture,” while still another predicted that restaurants who adopted Rimm’s suggestion would incite “riots in the streets.”

Some Tweets were less savage and more tongue-in-cheek. @Lovebug1016 asked: “What’s next? Telling us something psycho like eating an entire pizza doesn’t count as one serving?”

Top Chef host Padma Lakshmi tweeted simply: “I don’t have time for this kind of negativity in my life right now.”

Despite the social media backlash, Rimm stands by his admonition. In an article by Vanity Fair, which dubbed him the “Six-Fry Harvard Professor,” Rimm said he would appreciate it if fast food restaurants at least offered the option of a smaller order.

“Am I really a monster?” Rimm asked. “A lot of tweeters in the U.K. and the U.S. act like I just caused a third world war!”