Fortnite Monopoly: The Perfect Marriage of Rage and More Rage 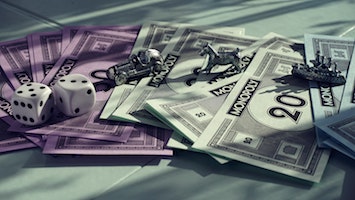 Form that L-for-love and kick your feet, it’s time to start taunt-dancing in real life.

In a pairing most likely dreamed up in the early morning hours after the world’s worst gaming binge, Hasbro and Epic Games are teaming up to release Monopoly: Fortnite Edition (cue explosion noises). Both games feature last-man-standing victory conditions: one by crushing your opponents with brutal capitalism and the other with cartoonish violence. And both are well known to incite fury in losing players. In fact, turning the Monopoly board over in pure anger after landing on your (former) best friend’s hotel-bejeweled Boardwalk for the third time was the original version of the “rage quit.”

Fortnite has taken the video game community by storm. A “battle royale”–style game, Fortnite drops 100 players on an island stocked with weapons, hiding spots, and materials to build giant sky towers and tells them to fight to the virtual death. Since its release in 2017, Fortnite has amassed 125 million players (and 250 million or so curious parents asking, “What on Earth is Fork Knife?”).

Monopoly, originally conceived as a capitalism misery simulator called the “Landlord’s Game,” has consistently found ways to monetize the pop-culture zeitgeist. Since 1994, Monopoly has released or licensed a steady stream of reskinned editions designed to appeal to appeal to niche audiences. Special editions range from the mundane Disney Theme Park Edition to the quirky Dr. Who Edition — exterminating Daleks included! Fortnite isn’t even the first video game special edition. Zelda, Super Mario, and Pokémon have all had their likenesses grace Monopoly box tops.

Meanwhile, Epic’s Hunger Games–esque battle simulator has generated over $1 billion (real dollars, not Monopoly Money) in revenue by selling digital avatar makeovers that have no effect on actual gameplay.

Come to think of it, I guess that makes Fortnite a perfect fit for Monopoly.

Hopefully, Hasbro and Epic Games have found a way to incorporate the battle royale juggernaut’s most useful strategy: hiding in the corner of a room in an obscure house while waiting for everyone else to lose.

Monopoly: Fortnite Edition launches out of a flying bus and onto store shelves on October 1st. Friendships beware!

Fortnite has now been cited in divorce proceedings. The marriage death count stands at 200 in the United Kingdom alone.