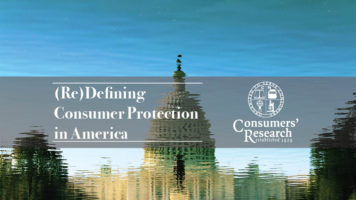 Consumers’ Research hosted a panel discussion of the meaning and challenges of consumer protection at Capitol Hill on Thursday.

The discussion, titled “(Re)Defining Consumer Protection in America,”  touched on a variety of consumer financial protection issues, including payday loans, other quick credit options for low-income consumers, and the record of the Consumer Financial Protection Bureau.

The four panelists represented a wide range of experience and viewpoints. They included:

“Our hope with this panel,” Burgess said in her opening remarks, “is to provide you with a stronger understanding of the competing definitions and narratives surrounding consumer protection, as well as bring your attention to misconceptions and areas of common ground, so that you can help policymakers and regulators better serve and protect American consumers.”

The discussion covered a number of issues pertaining to consumer welfare.

Loan interest rate caps became a contested topic. Peterson defended them while Zywicki criticized them.  Payday loans, Zywicki said, are not ideal, but they do serve a legitimate need; namely, they provide credit for people without access to other options. Zywicki cited the criminal activity of New York mobster and loan shark Anthony “Fat Tony” Salerno as an unintended consequence of some usury laws.

“What we have seen over time is this cycle where when you take away choices, you raise barriers to entry,” Zywicki said. “It tends to drive out the lowest-income borrowers who end up turning to more desperate measures and the like.”

Pappalardo and Miller both emphasized the need for further research regarding consumer financial protection, a field of study which Pappalardo said has relatively little academic research.

The challenge of crafting good consumer protection policies, Pappalardo said, is the extreme diversity of consumers.

“People are different,” Pappalardo said. “They have different objectives. They have different constraints…So I think it’s really important when doing this type of regulation to think about the question of ‘Are people really very similar and do they behave the way I think they should behave, or are people very different in terms of their objectives and their constraints?’ And, when writing regulation, [we should also ask] ‘Is the heterogeneous nature of consumer preferences and constraints taken into consideration in doing the analysis?’”

Consumers’ Research hopes to host similar events to this one in the near future. For event updates and consumer-related news, please follow Consumers’ Research on Twitter @ConsumersFirst and on Facebook. You can also subscribe to the organization’s newsletter at www.consumersresearch.org.