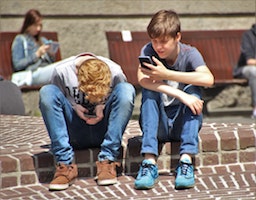 The lawsuit alleges that Tiny Lab Productions, a Lithuania-based developer of gaming apps such as Fun Kid Racing, Candy Land Racing, and GummyBear and Friends Speed Racing, unlawfully collects the data of children playing the games and shares it with advertising networks, including one company owned by Twitter. It also alleges that Google condones the data collection.

“These apps can track where children live, play, and go to school with incredible precision,” New Mexico Attorney General Hector Balderas said in a statement. “These multi-million-dollar tech companies partnering with app developers are taking advantage of New Mexican children.”

NBC News frames the lawsuit as “a new privacy battleground” for tech companies facing increased scrutiny from politicians, regulators, and consumers over the collection and use of user data.

In 1998, Congress passed the Children’s Online Privacy Protection Act (COPPA). The act requires explicit parental consent for the collection of children’s data by tech companies. Since the act was signed, the Federal Trade Commission has brought nearly 30 cases alleging violations of the law by companies that include Sony and Yelp. All of these firms ultimately settled with the agency.

Jonas Abromaitis, Tiny Lab founder, insists the company followed the law because the apps screen users under 13 with an “age gate.” If a young user’s data is collected after he lies about his age, or while using the device of an older sibling, Abromaitis claims that Tiny Lab is not legally responsible for the collection of a child’s data, citing the Federal Trade Commission’s guidelines for COPPA.

When it submitted apps to Google’s store, Tiny Lab would indicate they were for “families,” rather than “children,” the New York Times reported. Under privacy law, apps aimed at children can never collect user data, whereas apps with a broader audience can — so long as they come with an age gate.

According to one study, developers avoid characterizing their products as “children’s apps” to maximize potential advertising revenue. It claimed that, of the 5,855 apps it researched, about 57 percent was potentially violating COPPA, while 40 percent was sharing personal data without proper security. Five percent shared personal location or contact information without permission.

Last week, Google removed Tiny Lab’s account and deleted all its apps from the Play store. The company also stated that it does not certify whether apps in its store adhere to child privacy laws.