Consumer Survey: The Best Way to “Swipe” a Mate 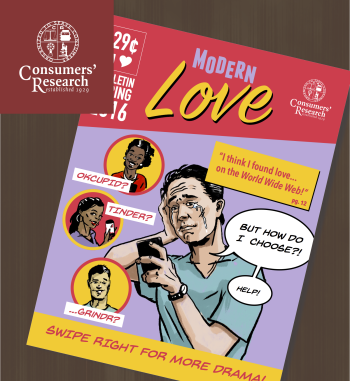 Despite the love–hate relationship many have with online dating, after 20 years, not only is it here to stay, soon it may boast the best odds for finding a match. For starters, research indicates that online dating is no longer taboo – more people are doing it, more people are talking about it openly, more people are having success with it. According to Pew Research, the public opinion of people who search for love online has much improved over the past five years. That’s likely no surprise to younger generations; however, for those who didn’t come of age with the Internet, it would have been scandalous to follow suit with 1998’s “You’ve Got Mail” and use AOL to meet someone irl. (You might get hacked up by a crazy person!)

Dating websites and apps employ complex algorithms via user-friendly technology to help users find partners for love, lust, and even platonic friendship. But are these digital matchmakers any better than the traditional methods of meeting people – set-ups by friends or family members, chance encounters (read: meeting in a bar), happy accidents in the check-out line at the supermarket (which, let’s face it, never really happens)? If anecdotal experience and academic research are any indication, the answer is no… and yes.

Online dating tools come in a variety flavors: web-based, app-based, swipe-based, substantive profile, limited profile, LGBTQ, kinksters encouraged, seniors only, farmers only (yes, really), beautiful people only (yep, that’s a thing too), and so on. Basically, if you can think it up, it’s probably out there.

So, what’s the right dating app for you? How can you achieve success through online dating? Well, the few hundred people we asked about their experiences with online dating may be able to help you. We began   conducting our survey before some of the newer entrants had much traction, so we apologize if you’re curious about Bumble and Hinge. Guess you’ll just have to try them out yourself to see if they’re a good fit. 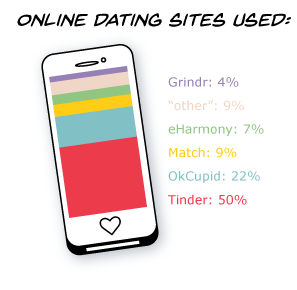 Among the options presented in our survey (Tinder, OkCupid, Grindr, Match, and eHarmony), the most popular digital matchmakers by far were Tinder and OkCupid, which is in line with active user numbers reported for these platforms. Our survey also indicated that tech savvy Millennials seem to be utilizing their devices to cast a wider net for potential mates by using a number of dating apps, instead of just one. Columnists and researchers agree; a wide net is the greatest benefit of online dating. 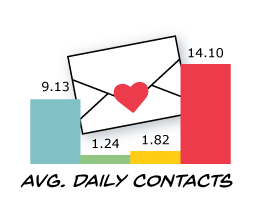 Online dating advice gurus recommend an outgoing spirit in the quest for online love. Our survey showed that while the majority of online daters averaged fewer than six new attempts to connect per day, those who sent more messages (either initially or in reply to messages received) ended up in relationships more often than those who did not engage in communication. Though the majority of correspondences lasted less than a week, increased interactions seem to be linked with higher success rates for winding up in relationships (of any duration).

While common interests and shared experiences are the building blocks of making a connection, being too specific may be a recipe for failure. Online dating sites are great for widening your sphere of potential dates, but if your preferences are too narrowly focused, you may limit that advantage if you’re reluctant to communicate with or meet up with potential matches. 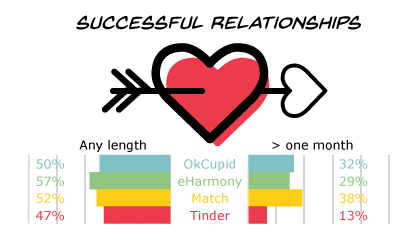 Survey respondents who reported using Grinder and dating sites not listed in our survey (including Scruff, Coffee Meets Bagel, Plenty of Fish, DateMySchool, and MeowChat), reported having greater success in finding relationships (short- and long-term) than the other sites we included; however, too few respondents listed those sites for us to glean anything meaningful from the data. (We know. Boooo! We really did try though.) 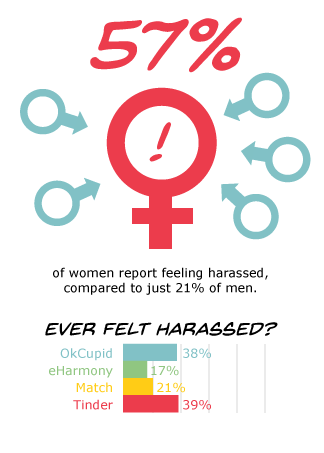 In more general terms, online dating has provided scientists and sociologists a look at the inner workings of love and other social structures. For example, based on OkCupid’s data blog, men have a tendency to message the most attractive women on any given page only. Ethnicity can also shape what users look for in a partner and what they see when reviewing potential matches. Online dating has also affected the way we date, in some cases leaving many of us with an “unlimited options” problem – either we can’t choose or have trouble being satisfied when we do. One thing is certain; we won’t be swiping online dating left any time soon.