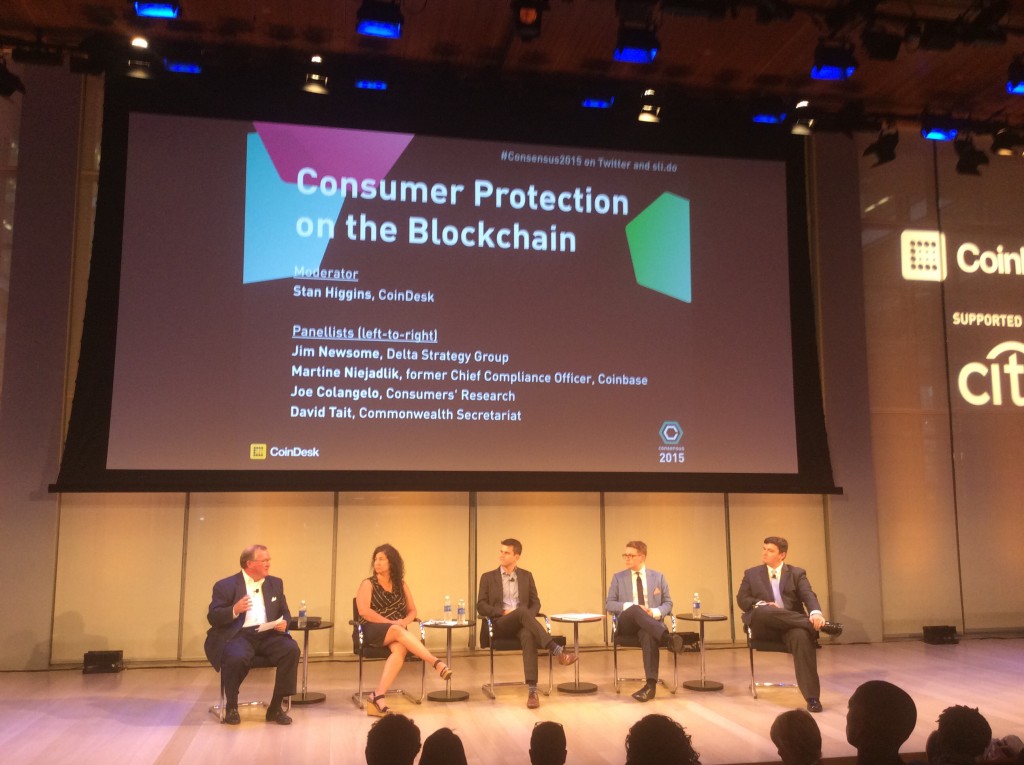 CoinDesk hosted its inaugural blockchain technology-related conference last Thursday at the TimesCenter in Times Square, New York. The stated goal of the conference was to identify and debate real-world problems that bitcoin and blockchain technologies might solve. Speakers and participants included leading technologists, inventors, and entrepreneurs, as well as representatives from organizations such as Citi, PayPal, and multiple U.S. government agencies. The well-attended event made full use of the main conference hall as well as a spillover space with a projection of the sessions and an area for networking and learning about event sponsor products and services.

Consensus 2015 opened with a talk on the current state of the blockchain and segued into a session on the future of blockchain innovation. From there, panelists discussed the merits of the unprecedented transparency offered by the blockchain, with current and former U.S. Department of Justice officials Kathryn Huan (current) and Jason Weinstein (former), making the case for the use of blockchain technologies as a powerful tool for law enforcement agencies. Other major themes included social impact, consumer protection, financial inclusion, and opportunities associated with the reduction of transaction costs and time.

If you were to look at the spectrum of people who use bitcoin right now, probably the number one threat to them is hosted services running away with their money. There are a lot of other threats out there, but historically – over 70 documented cases of bitcoin thefts of over 500 bitcoin – the vast majority of those cases are hosted services running away with those bitcoin.”

In other words, “buyer beware” (i.e. doing business with unvetted or unsavory entities) is the true threat to consumers, not digital currency protocols. The panelists collectively identified regulation and consumer education as a ways to curb consumer risk, with Colangelo pointing to “compliance as a service” as a potential way to foster the continued growth of blockchain-based products and services while regulation and education catch up to technology.

While only one panel directly focused on the topic of mass adoption, several touched on what is referred to as the “killer app” – the use case of blockchain technologies that will result in mass adoption of digital currency protocols. This topic has consistently been at the forefront of blockchain-related conferences, with Consensus 2015 as no exception. Approaching adoption from their varying perspectives – government, Wall Street, merchant, consumer, and traditional financial services – panelists seemed to differ on what would be the use case that ultimately brings digital currencies mainstream; however, they all seemed to agree that digital currency adoption is on the horizon. Even New York Times reporter Nathaniel Popper, who outlined how previous experiments in digital currency have failed to achieve adoption in the past, acknowledged that a “killer app” would lead to mass digital currency adoption.

Whether it’s the proliferation of micropayments, promise of financial inclusion, security of multi-signature technology, improved ease of mobile money transfer, reduction of transaction and settlement cost and time, or it’s something entirely new like smart contracts or digital tokenized identity, property, or medical records, conference participants largely came to consensus on the inevitability that blockchain technologies will persist and become mainstream.