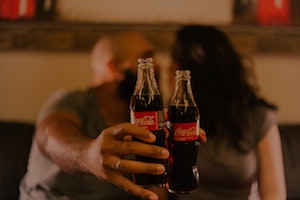 The Coca-Cola Company, facing declining soda sales, is reportedly considering the development of a new beverage that would incorporate a chemical derived from marijuana.

Coke may soon be creating drinks that are infused with cannabidiol (CBD), a chemical found in cannabis. A Coca-Cola spokesman emphasized that the company is not interested in marijuana as such, but that it is “closely watching the growth of non-psychoactive CBD as an ingredient.”

In terms of marijuana “drinkables,” the two most noteworthy cannabis products are chemicals tetrahydrocannabinol (THC) and CBD. THC, a psychoactive, creates a euphoric sensation in the mind, getting users “high.” CBD, however, is not psychoactive. Instead, it interacts with the human body’s system for regulating sleep, immune-system responses, and pain. Using CBD, Coke would create what it calls a “functional wellness beverage.”

BNN Bloomberg reported that Coke has been in talks with Aurora Cannabis Inc., the third largest cannabis producer in Canada, about developing this beverage. As of Oct. 17, recreational use of marijuana will be legal in Canada. Although recreational weed remains a federal crime in the United States, Kris Krane, president of a medical cannabis dispensary consulting firm, hypothesizes that Coca-Cola would not be developing a product solely for the Canadian market.

“I can’t imagine they’re doing it just for the 35 million people in Canada,” Krane said. “They clearly have an eye on the U.S. market.”

Changing laws and attitudes suggest marijuana may not be a federal crime for much longer. In June, the Food and Drug Administration approved the first medication infused with cannabis-extracted CBD — the same chemical that Coke is considering. Epidiolex, as the medication is called, treats a rare form of epilepsy. It can be prescribed to patients as young as 2.

Coca-Cola is not the only company considering an entrance into the cannabis market. Major beer companies are investing in marijuana-infused products. Constellation Brands, maker of Corona beer and Svedka vodka, invested $4 billion into a Canadian marijuana firm with intentions of developing a cannabis beverage. Molson Coors recently announced its partnership with The Hydropothecary Corp. in order to develop non-alcoholic cannabis drinks as well.