Caltech Engineers Develop a Gyroscope Smaller Than a Grain of Rice 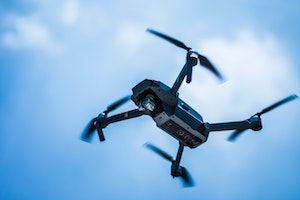 Engineers at the California Institute of Technology have managed to reduce the size and increase the accuracy of optical gyroscopes, a potential boon for future drone and spacecraft technology.

Unlike the original gyroscopes of the mid-1800s that used rotating disks and spheres to investigate the Earth’s rotation, gyroscopes today are used to orient objects such as planes or smartphones in three-dimensional space.

Smartphones use a different type of gyroscope to determine whether to display the screen in landscape or portrait mode based on how the user holds the phone. According to Science Daily, this gyroscope, which uses microelectromechanical sensors (MEMS), is limited in its sensitivity due to certain moving parts.

Optical gyroscopes, on the other hand, use light to achieve a similar effect to MEMS gyroscopes and are generally considered more accurate. Their design limited how small engineers could build them — until now.

Optical gyroscopes use what is known as the Sagnac effect. Named after French physicist George Sagnac, the Sagnac effect uses twin beams of light moving in opposite directions along a circular path toward a sensor to measure “phase shifts.” Because light travels at a constant speed, both beams reach the sensor simultaneously.

Rotating the gyroscope changes the light’s path, meaning one beam will reach the sensor before the other. In this way, the Sagnac effect gauges an optical gyroscope’s orientation.

The miniaturization of optical gyroscopes was limited because smaller devices necessitated smaller light sensors, which were less sensitive to motion and therefore less accurate.

To solve this problem, the Caltech engineers used a new approach called “reciprocal sensitivity enhancement,” which mitigates interference to the two light beams and ensures the gyroscope’s accuracy.

Besides being smaller than the current state-of-the-art optical gyroscope, the Caltech team’s invention can detect phase shifts 30 times smaller.

Consumers may not see the effects of the tiny optical gyroscope for a while, but its engineers expect the mechanism will affect many electronic devices in the future.

“This demonstration shows the potential of integrated optical gyros, and can open all kind of applications that need low-cost, small, and highly accurate gyros — like gaming devices, autonomous vehicles, wearables, CubeSats and nanosats,” Professor Ali Hajimiri, who worked on the device, told Digital Trends. “[The] next step is to improve the sensitivity and make it smaller, as well as enhancing integration capabilities. We are thinking about commercializing our device.”