Buckle Your Seatbelt: The Consumer Drone Age Has Arrived and This Flight May Have Some Turbulence 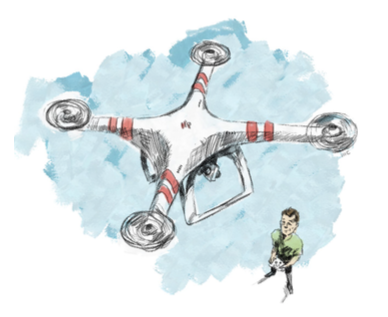 Whether you call them drones, quadcopters, or unmanned aerial vehicles (UAVs), expect to see more flying cameras buzzing around parks, cities, and every site you can imagine. Drones are one of the most popular tech gadgets on the market.

In this article written by guest expert Will O’Brien, Consumers Research takes a look at the drone phenomenon, and describes some of the challenges and opportunities this emerging industry faces.

The term “drone” has become the household word
that refers to an unmanned aerial vehicle (UAV), either remotely piloted or autonomous. Drones can be big, like the ones used by the military, or small, like the consumer drones sold on Amazon.com, which now has nearly 2,500 quadcopters listed in its online store.

In the last few years, the major manufacturers of consumer drones, such as Chinese firm DJI or former WIRED editor Chris Anderson’s company 3D Robotics, have come down the learning curve in the key technologies used to stabilize flight and remotely pilot their aircrafts, making drones extremely simple to fly. At the same time, the prices of drones have plummeted as a result of competition, open- source innovations, and low-cost manufacturing. There are quality drones that sell for less than $100, and even

the prosumer drones that have high-end cameras and advanced flight-control technology that cost only a few thousand dollars.

In short, drone technology is ready for the mainstream and drones are selling.

What can you do with a drone? You can fly it with a remote that looks much like an Xbox or PlayStation® game controller. It is a fun activity to simply race around the air with a drone. Most drones automatically hover in the sky when you take your hands off the controls, so you don’t have to be an expert pilot to use a drone.

Also, most drones come equipped with cameras, allowing you to easily capture aerial photography and video. Want to film the outside of your house to show off on a real estate listing? Or film a wedding from the sky? Or fly over a river or a canyon? Drones now enable consumers to capture footage that was previously only possible by professionals with expensive equipment.

Sounds Like A Great Innovation and Good Pricing for Consumers. What Could Go Wrong?
What could be bad about letting millions of drones into the airspace? Unfortunately, there are significant risks that need to be managed, and there have already been a number of close calls and a few accidents.

For example, in June, a man in Seattle was filming a parade and accidentally crashed his drone into a building. The drone spiraled down and hit a woman in the head, knocking her unconscious. The man was later charged with reckless endangerment.

Drones have been flown onto the lawn of the White House and have crashed into landmarks. During the California forest fire season, amateur drone pilots hoping to get some exciting footage caused delays for first responders who were hesitant to fly their aircrafts carrying water and fire retardant over the sites for fear of mid-air collisions. The Federal Aviation Administration (FAA) reports that drones have nearly collided with commercial airliners hundreds of times.

These risks clearly call for a set of rules around the usage of drones. So where are we with the development and implementation of those rules?

Rules of the Sky and Some Confusion

There are already basic rules in place for flying consumer drones. You must stay below 400 feet and at least 5 miles from an airport. There are also “no fly zones,” both temporary and permanent, such as national parks and sensitive sites (i.e. airports, prisons, power plants, etc.).

Many consumer drones now come with built-in GPS or geofencing features, which prevent them from flying into sensitive airspaces. Additionally, there are mobile apps that can tell you whether you are clear to fly based on your location, however most people don’t learn these rules until they first make a mistake. Because drones are so easily purchased online or at retail stores and there is no licensing or certification process to fly, you can be ignorant to the rules and cause a major problem by flying in the path of a jet airplane or helicopter.

In the FAA Modernization and Reform Act of 2012, Congress set deadlines for the FAA to define the requirements and process for keeping the consumer and commercial usage of drones safe, but the FAA has failed to fully implement such measures and has missed some deadlines.

The FAA recently announced that a federal law, which came into effect December 21, 2015, requires all unmanned aircraft to be registered to the owner by name, address, and model details. That way, if an accident

or incident were to occur, police could track down the responsible party. The registration fee is $5, but will be waved for anyone who registers prior to January 20, 2016. Additionally, the FAA states that the fines for failing to register drones include civil penalties up to $27,500 and criminal penalties up to $250,000 and imprisonment up to 3 years.

Even with an established set of guidelines and proper usage, drone operators can get into trouble just from confusion. As a case study, consider Cleveland Aerial Media (CAM), a leading provider of aerial imagery, which was hired to film the demolition of a bridge near downtown Cleveland. The project was sponsored by the Ohio Department of Transportation (ODOT), which provided permission to CAM to film the explosion. After footage was published by CAM, viewers began filing complaints to the FAA about CAM violating temporary flight restrictions (TFR). Although ODOT had given permission, the FAA had issued a TFR for the same site.

After a meeting with the FAA, the confusion was cleared and CAM was given the greenlight to continue operating its business. Further, CAM was granted a Section 333 exemption, which gives the company broad permissions to fly where amateur pilots cannot, and to fly for commercial purposes.

In reflecting on the confusion, Cleveland Aerial co-owner Anthony Serio commented, “What we really need are a set of rules to make sure people fly safely, a way to enforce those rules, a proper way of tracking drones and holding operators accountable, and perhaps most importantly, a way for these small aircraft to communicate with other larger aircraft.”

Looking Ahead: Great Opportunities and Near-Term Challenges
The future is undoubtedly one full of drones. Amazon and Google have announced plans to use drones for delivery. Drones can be used to bring medication or first response equipment faster than ambulances. Drones are being used by journalists to fly into humanitarian crises to expose crimes and dangerous situations through raw video footage. Drones will be used across industries including construction, surveillance, security, real estate, television and film, wildlife management, agriculture, environmental monitoring, and search and rescue. And of course, consumer drones make for a fun way to capture a family holiday or event in your city.

But the future with drones needs to be one that is safe
and respects the privacy of individuals. Just like when smartphones came out, consumers suddenly had amazing new technology at their fingertips that could take photos, give location-based directions, and connect to anyone over the Internet. And that same technology was initially scary because people were justifiably worried about inappropriate photo capture, stalking based on location, and mobile data companies breaching consumer privacy by peeking into their phone usage.

If we get this right, drones could add a lot of value and enjoyment to our daily lives. The challenge is that we could get it wrong in two ways. The first is to not have the right rules in place that protect consumers, and that is where we are today. The second is to have a set of rules that creates too much of an onerous burden on consumers who simply want to fly their $100 gadget they received for Christmas.

The solutions will come, as always, from the market. Drone manufacturers are already allowing app developers to build on top of their platforms. With more entrepreneurs working on solving these problems, the concerns of the FAA and other agencies around the world will largely be met, consumers will be informed and protected through smart software, and the drone market should continue to take off to clear skies. ◀

About the author: Will O’Brien is serial tech entrepreneur and investor. Drones is one of his top categories for disruptive innovation. Find him on Twitter at @willobrien.