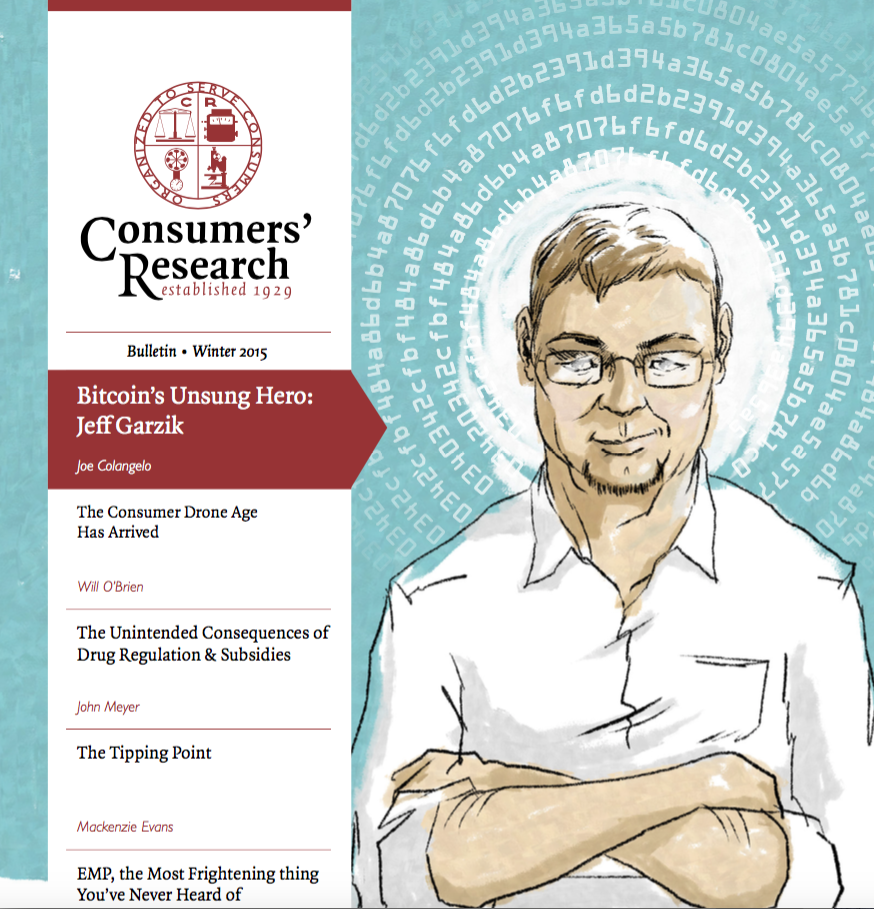 For someone who spends his days building the future, Jeff Garzik is a pretty humble guy. In fact, you’d be forgiven for never having heard of him, even if – like a growing number of Americans – you use the products of his labor every single day. In an industry with no shortage of self-promotion and inflated egos, Garzik is an outlier, an unassuming presence in a sea of proselytizing tech ambassadors who are all exalting the future of money.

I’m talking, of course, about Bitcoin. Garzik, the overtly polite family man I met over burgers in Atlanta, Georgia, is one of the people in the world most responsible for making it happen and keeping it together.

Garzik is hard to pin down. The day we met, he had just gotten back from Abu Dhabi, where he spent the previous week meeting with sheikhs and UAE businessmen about Bitcoin and its ever more popular analog, the blockchain. Although we had met on a couple of occasions, I was struck, as always, by his modesty and humility.

Recently, Garzik has focused on the issues of scaling and security, looking for ways to safeguard mining nodes against attacks. After he briefly working to put with the bitcoin in space (his company, Dunvegan Space Systems, would have floated bitcoin nodes in satellites but failed to gain traction) he has formed his first large Bitcoin startup, Bloq, whose mission is currently described in generic terms as “professionalizing the entire Bitcoin ecosystem.”

Garzik has the best ratio of braggadocio to actual accomplishments in the Bitcoin community. That is, he has very little of the former, and a staggering amount of the latter. As one of the most prolific programmers to work with the open-source Bitcoin protocol, he has made over 1,000 “commits” to the system1, and has served as one of the community’s most judicious voices since he got involved back in 2010. He’d be a great candidate for someone to make decisions for the entire Bitcoin ecosystem, unfortunately because the idea of a “king” of Bitcoin is antithetical to the ethos of open-source, he’s the last person who would accept such a position.

Jeff Garzik started programming at the age of eight. His father, a fighter pilot in Vietnam who passed away a few years ago, got into IT after returning home from the war.

Jeff remembers his father building their first television, soldering circuit boards. “You call it maker today, but that word didn’t exist back then.” It instilled in him the knowledge that, as he says, for pretty much anything, “You can build it just as much as you can buy it.” Since computers were in his home, Jeff could tinker on them, teaching himself computer languages and programming at an early age.

As he continued his self-education, he developed a fondness for open-source platforms like Linux. After graduating from Georgia Tech in 1996 he worked for CNN as one of their first web developers. He then returned to his open-source roots and worked at Redhat for the bulk of his career.

As someone who has questioned the Federal Reserve system along with current monetary policy, Garzik had seen a number of alternative digital currencies come and go and hadn’t put much stock in them. With Bitcoin, he says, the story was different. The open-source platform attracted his attention early on, and he started programming on it in 2010, less than a year after the protocol’s release.

Garzik’s refers to his first patch to the Bitcoin software as a “lesson learned” in open-source contribution. In 2010 he uploaded a patch that, if accepted by the bitcoin network, would have immediately changed the Bitcoin block size to 20 MB, the same transaction rate as Paypal. In hindsight, he admits that it was a very naïve patch, since it didn’t fully account for the idea of how patches are accepted or the incentives of miners. If only some people adopt the patch, Garzik, argued, “then some people are on Bitcoin island and some people are off Bitcoin island.”

He goes on to stress the importance of avoiding what he calls “incompatible laws.” Pointing out that open-source development and Bitcoin especially is all about merit, “As a developer, you have to prove yourself as new entrant in the marketplace of ideas and you don’t do it based on you words or your looks or your personality, it’s your code output.”

(A “commit” is a permanent change made to a computer system or piece of software. When Bitcoin was first introduced by the anonymous Satoshi Nakamoto in 2009, he allowed coding-adept users to propose changes, subject to approval of the community at large. After approval, the proposed change becomes a “commit.”)

To scale or not to scale

The problem with electing a leader of Bitcoin is that if someone had the authority to make decisions for the network, it would open up that person to duress or corruption and all the problems that Bitcoin is trying to solve. As such, many of the developers are resistant to leadership. This in turn creates a governance problem, because if you don’t have any leadership, it’s very difficult to decide which direction to go in the block size debate.

The “block size debate” is the current deliberation within the Bitcoin community on whether, and how, to increase the size of “blocks” that are processed by bitcoin miners. A small block size means fewer transactions can be processed at one time, but also requires less work by miners, the people who process bitcoin transactions. A larger block size means that Bitcoin can scale to the size and activity level of Paypal, Bank of America, or anything.

Ultimately, the attempt with Scaling Bitcoin, which is a series of conferences that have already taken place in Montreal and Hong Kong, is to shine a light on the different viewpoints from different factions throughout the Bitcoin community. One of the main problems, Garzik points out, is that there’s no way to measure users of the system to get consensus. Who do people think should be in charge of making decisions about Bitcoin, and what does Jeff Garzik think of those decisions?

Developers? In Garzik’s opinion, “developers should not be economic high priests. You shouldn’t trust me to make decisions for Bitcoin.” How do you sample the economic consensus, then?

Large bitcoin holders? Garzik also thinks that’s the wrong way to go, giving large owners of bitcoin control over the direction of development. “That’s not egalitarian, and I want a far more egalitarian system as opposed to one that disadvantages new people coming in to the system while helping a small clique of stakeholders.”

All bitcoin users? Well, how do you sample bitcoin users? “This guy just owns a penny of bitcoin, should we trust him with as much power as someone who has invested a lot more into bitcoin? How well informed is this person? You see the same thing in democracy. Donald Trump is an excellent example of someone who has a lot of popular support,” says Garzik. “I’ve bought his books,” he continues, “and studied him for decades well before his presidential run. It’s very easy for a populist candidate to get a lot of support. Translating that back into the Bitcoin analogy, you don’t want mob rule to dictate where Bitcoin goes.”

“The best attempt at solving this problem is to be very public about what we’re doing as developers and soliciting input from key Bitcoin actors and as many users as we can,” says Garzik.

On the topic of governance, Garzik ends with one of his favorite truisms. “Democracy, like decentralized systems, is intentionally inefficient.” Centralized systems, he points out, can have single points of failure that can be exploited to take down the entire system. Decentralization adds friction to the system but at the same time creates resilience in the face of attack.

To continue the democracy analogy, Garzik believes that an ultimate system to govern Bitcoin will account for many of the diverse interests that bitcoin users, programmers, holders, and miners all represent. Working through Scaling Bitcoin, Garzik has helped to shape a governance model that will accommodate the interests of all stakeholders – whatever that ends up looking like.

What does Garzik think about the future? He’s wildly optimistic about the potential for technology to continue improving lives. With programmable money, consumers will have greater protection of their own assets than ever before. With the help of Moore’s Law, the cost of processing power will continue to decrease, putting the most sophisticated computing power in the palm of every consumer, all across the world.

He sees threats to this prosperity, of course. One of the threats that stands out in his mind is the current debate surrounding encryption, and the position of many government officials that encryption methods should only be permitted when “backdoors” are installed that afford law enforcement access to information that is otherwise encrypted. He points out that, from a programming point of view, it is both logically and mathematically impossible to have a backdoor that only the good guys can use. Combine that with the recent trend in which governments are not sharing the knowledge they have about exploits with institutions that are vulnerable to them, and the encryption backdoor presents a recipe for disaster.

Who is Jeff Garzik? He’s the son who carries his father’s dog tags with him as a reminder of the people who have worked hard to give him the opportunities he’s been given. He’s the programmer who once naively tried to change

the Bitcoin block size and, years later, is trying to do it the right way. He’s the man who might save Bitcoin, and who won’t take any credit for it. ◀