Bitcoin 101 Panel at the U.S. House of Representatives 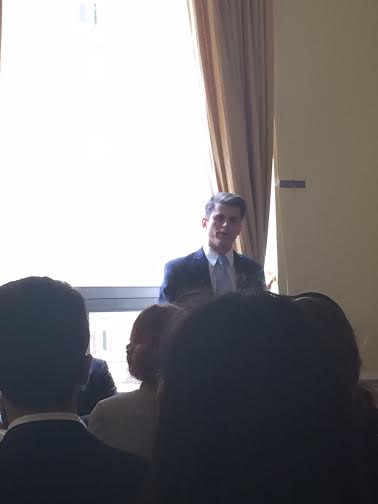 Bitcoin, and its various implications for consumers, was the topic of discussion this morning at a briefing at the United States House of Representatives entitled “Bitcoin 101.” Sponsored by Representatives Polis (D), Goodlatte (R), and Mulvaney (R), the event was designed to educate members of Congress, their staff, and other interested parties about the potential of Bitcoin and the importance of appropriate regulations for its use as a cryptocurrency.

The distinguished panel brought together experts from across the Bitcoin world. Jerry Brito from the Mercatus Foundation, Jim Harper from the Bitcoin Foundation, Adam White from Coinbase, and Joseph Colangelo from Consumers’ Research all presented on various aspects of both the protocol and the “currency” that is Bitcoin.

Brito opened the discussion by outlining what he viewed as the two most important features of Bitcoin for consumers—speed and cost. He pointed out that Bitcoin allows the transaction of funds to happen faster and cheaper than any established system. He illustrated this fact with a personal narrative about his mother trying to send money to family members in Spain. The system that he and his mother used charged a 5% fee on the transaction and the funds took two days to transfer. He compared this to Bitcoin in which current transaction fees are no more than 1% and the funds are transferred at an essentially instantaneous rate. It is this speed and efficiency, stemming from Bitcoin’s peer-to-peer system that avoids the middleman, that Brito feels will be one of the defining factors in Bitcoin’s growth.

The next panelist to present was Jim Harper from the Bitcoin Foundation. Harper discussed a number of topics including the potential for Bitcoin to serve as a system for global financial inclusion. According to Harper half of the world’s population does not have access to financial institutions. Thus, he argued that the global nature coupled with the openness of the Bitcoin protocol lend it potential to be spread around the globe, giving financial access to a number of individuals. Harper then went on to talk about consumer issues regarding Bitcoin. He pointed out that one of the most important factors that will lead to the continued growth of Bitcoin would be an increase in the number of businesses accepting the cryptocurrency. This is because as more companies start to accept BTC, more consumers will begin to see the value in the cryptocurrency.

The final panelist to present was Adam White from Coinbase. Much of the early part of his comments focused on the way in which Coinbase helps to allow large-scale merchants to accept Bitcoin as a legitimate form of payment for their services. He went on to talk about the importance of compliance in the world of Bitcoin. He made the argument that one of the biggest reasons that Coinbase has been successful is due to the fact that they are able to carry out transactions while simultaneously assuring their clients that they will not be at risk of volatility. He concluded his remarks by pointing out that Bitcoin is still a new technology and that innovation will be important in expanding Bitcoin in the future.

The discussion concluded with a question and answer period from the audience. The majority of these questions focused on the topic of regulation. As Colangelo and other members of the panel noted, regulation is an appropriate next step for Bitcoin. Though the panel did not reach a consensus on what these regulations should be, they all echoed the sentiment that regulations must be able to protect consumers without stifling innovation.

This panel was not the only Bitcoin related event planned at the House of Representatives for the day. There will be a Bitcoin Demo Day in which Bitcoin related companies and firms will exhibit some of the most recent innovations in the field.

A rising senior at Colgate University, John is currently working as a research fellow with Consumers' Research.