Best Practices for Enjoying Your Summer with Fewer Mosquito Bites

Pesky mosquito bites can quickly ruin a relaxing summer evening spent outdoors, and with so many products on the market that claim to be the most effective at repelling mosquitoes away, it can be hard to find the right one. Genetically modified mosquitoes that self-limit their population may be on the horizon, but until that day comes, people can only rely on repellants and staying indoors.

In 2015, the Journal of Insect Science published a study comparing the effectiveness of different brands and their products, and the results were replicated again in 2017. The study tested two types of mosquitoes and tested each product’s effectiveness upon application and four hours after.

Which Products Were Most Effective?

According to the 2015 study, the top products that the group of researchers tested were the ones that contained DEET and oil of lemon eucalyptus (PMD). Examples include:

The 2017 study found the wearable repellant device, OFF! Clip-On, to also be an effective repellant. Below is an infographic from NPR that summarizes the 2015 study’s findings. 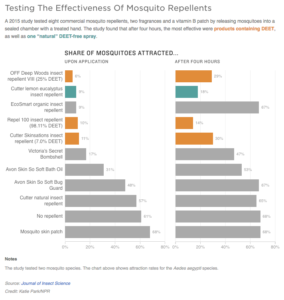 What Are These Ingredients?

DEET, or N, N-diethyl-meta-toluamide, is a popular insect repellent and has been on the market since 1957. DEET is highly effective, but its side effects have been widely debated since its usage in commercial products. Studies have shown conflicting results: Dr. Mohamed Abou-Donia of Duke University Medical Center conducted 30 years of research on pesticides, and in his 2002 study, he found that prolonged application of DEET to rats “cause[d] neurons to die in regions of the brain that control muscle movement, learning, memory and concentration.” However, a 2014 study published in the journal, Parasites and Vectors, found that “animal testing, observational studies and intervention trials have found no evidence of severe adverse events associated with recommended DEET use.” In general, the known side effects are “irritation, redness, a rash, and swelling” after wearing DEET for extended periods of time.

The other popular ingredient in repellents is oil of lemon eucalyptus, otherwise known as PMD, or p-menthane-3,8-diol. According to Beyond Pesticide’s factsheet, PMD is known as an alternative to chemical repellents since it is naturally “extracted from the leaves and twigs of the lemon-scented gum eucalyptus plant.”

According to NPR, other effective ingredients to look out for are picaridin and IR 3535. Dr. Dan Strickman, who works with the Global Health Program at the Bill and Melinda Gates Foundation, tells NPR that “Picardin is a little more effective than DEET and seems to keep mosquitoes at a greater distance. When people use DEET, mosquitoes may land on them but not bite. When they use a product containing picardin, mosquitoes are less likely to even land. Repellents with IR 3535 are slightly less effective, but they don’t have the strong smell of other products.”

Metofluthrin, used in OFF! Clip On, is an effective repellant, with one study showing that metofluthrin repelled as high as 97 percent of mosquitoes. However, according to the Pesticide Properties Database’s ‘Health Issues’ section, metofluthrin is a liver toxicant, eye irritant, and neurotoxicant. The site also reports that metofluthrin is known to cause problems for reproduction and development. Additionally, the United States Environmental Protection Agency (EPA) classified metofluthrin as “likely to be carcinogenic to humans.”

Other Ways to Keep Mosquitoes at Bay

Wearing the right clothing, such as long-sleeved shirts and pants, can help reduce bites. However, looser fitting pants are better. According to Stacey Rodriguez, one of the researchers of the 2015 and 2017 repellent studies, “spandex is very mosquito-friendly. They bite through it,” so yoga pants and leggings are not ideal. Alternatively, staying indoors is always an option.