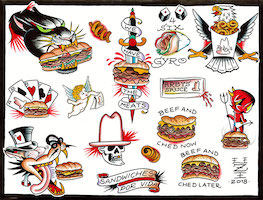 Not to eat, but to wear

Arby’s recently took over a tattoo parlor in Southern California, inviting fans to come get inked — for free — with one of a handful of Arby’s-themed designs. More than 100 answered the call.

Arby’s designs, envisioned and drawn at Port City Tattoo Shop in Long Beach, California, included a puma with its jaws wrapped around a sandwich, an eagle posed behind some fries, an angel delivering a fast-food bag, and a baby devil (wearing a diaper) guarding (with a trident) what appears to be a double roast beef sandwich with cheese.

Did these newly-inked Arby’s fans receive anything other than rad tats in exchange for making themselves billboards for life, say, free sandwiches or gift cards?

From Russia with pizza

Perhaps Arby’s learned a lesson from Domino’s Pizza, which staged a similar promotional gimmick in Russia. In late August, Domino’s promised 100 years of free pizza to anyone who got a tattoo of its logo “in a prominent place” and shared a picture of it on social media.

The promotion, which was supposed to last two months, was so successful that Domino’s canceled it after five days.

For the love of the sandwich

Arby’s made no such promises. Instead, the company made clear that its free tattoos were only for people with “a higher level of sandwich commitment.” And nothing says “commitment” like having your arm tattooed with a cheesy, dagger-impaled roast beef sandwich wrapped in a banner that proclaims “WE HAVE THE MEATS!”

The tattoo stunt was only one part of a decidedly weird advertising-campaign kickoff.

Aside from the tattoos, H. Jon Benjamin, the voice of Bob from Bob’s Burgers and Archer from Archer, recorded audio for a hotline to help the undecided select the ideal sandwich to sate their hunger based on sports interests.

Arby’s also hired an artist to create portraits using food, which the company posted on Twitter. We highly…recommend…them.