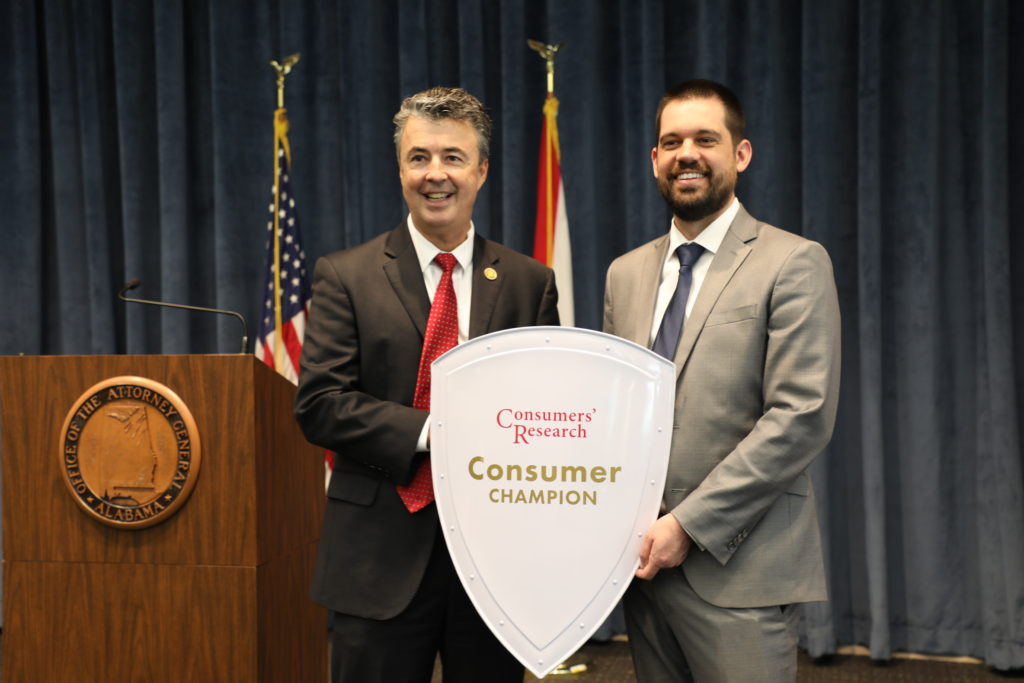 Washington, D.C. — May 6, 2021 – Today Alabama Attorney General Steve Marshall was presented the first-ever Consumers’ Champion Award by the nation’s oldest consumer protection organization, Consumers’ Research. The honor was bestowed upon Marshall for his extraordinary settlement win for consumers in Alabama’s lawsuit against Terminix International. The company was alleged to have systematically overcharged Alabama customers for termite services and in many cases of failing to honor their service contracts, often resulting in damages to homes and businesses. Settlements resulting in monetary awards against bad actors are not unusual, but what made this $60 million settlement announced by the Alabama Attorney General’s office on November 5, 2020 noteworthy is that consumers came first.

Settlements of this type typically end up with millions of dollars going to trial lawyers and just cents on the dollar refunded to the individual consumers. But this settlement requires Terminix to refund 100 percent of all overcharges to all affected consumers, and the settlement created a $25 million consumer fund to pay refunds and claims submitted by Alabama consumers. In this unprecedented settlement by the Alabama Attorney General’s office, the consumer fund is uncapped—if more than $25 million is required to pay all claims, Terminix will contribute to the consumer fund whatever additional funds are needed. Moreover, even though most of the damages were committed in only two Gulf Coast Alabama counties, Marshall insisted that the consumer fund cover all claims against Terminix statewide. All claims against Terminix in all Alabama counties can be paid through this consumer fund. The settlement further requires Terminix to pay millions to the Attorney General’s Office and to the Alabama Department of Agriculture to be used to finance future consumer protection and law enforcement needs. Finally, this settlement requires Terminix to re-inspect and re-treat all homes in the affected areas of Alabama, a benefit to Alabama consumers of approximately $10 million.

It is significant for consumers to receive the benefit of 100 percent refunds, and the additional benefit of an uncapped fund for any claim consumers may have against a corporation, which is why Consumers’ Research is bestowing its Consumers Champion Award to Attorney General Steve Marshall. By litigating the case themselves, General Marshall and his staff ensured that the settlement compensation is sufficient to pay 100 percent of every overcharge, and sufficient to pay all other claims for termite damages, owed to Alabama Terminix customers no matter how many millions of dollars that may cost Terminix. Even the Alabama consumers who left Terminix due to Terminix’s unfair price increases can file a claim and receive $650 or have their lifetime Terminix coverage reinstated.

“I am extremely proud of my Consumer Protection Division for their handling of this case, and for the way they go about their work,” said Attorney General Steve Marshall. “This team truly buys in to the mission of serving Alabama consumers. I am humbled to receive this honor on their behalf.”

“Present and former Alabama Terminix customers who believe they were treated unfairly by the pest control company don’t need to hire an attorney. As a result of the State settlement with Terminix, they may file a claim by visiting www.terminixfund.com,” Attorney General Marshall added.

“Not only was the Alabama Attorney General successful in defending the rights of Alabama consumers, but he did so without using outside counsel, or joining a multi-state enforcement that would have shared settlement with third-party lawyers,” said Will Hild, Executive Director of Consumers’ Research. “Consumers’ Research holds up Attorney General Marshall’s actions to other states as an example of consumer advocacy done right,” he concluded.

Founded in 1929, Consumers’ Research is an independent educational 501(c)(3) nonprofit organization. Its near century old mission is to increase the knowledge and understanding of issues, policies, products, and services of concern to consumers and to promote the freedom to act on that knowledge and understanding. Consumers Research frequently comments on the effects that laws, regulations, and government programs have on consumers. For more information visit: https://consumersresearch.org. 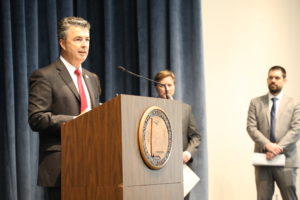 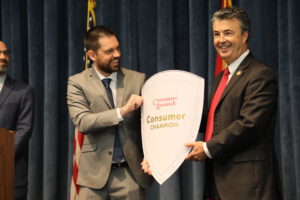 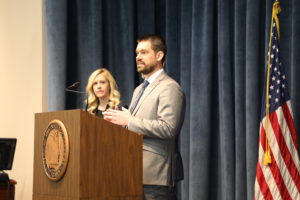