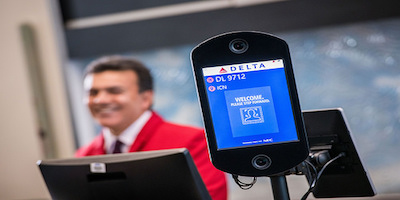 The Atlanta airport will now process some travelers with facial recognition scanners, a technology that airline representatives say will shorten the boarding process.

The technology scans passengers’ faces and “recognizes each person’s unique facial characteristics,” comparing them to a database of US Customs and Border Protection (CBP) verified ID photos.

At the biometric terminal, customers check in at one of several kiosks, where they enter passport information before having their faces scanned. At the security check, by simply looking into a camera screen, a TSA agent can see the passengers’ boarding pass, eliminating the need to pull out a driver’s license or passport.

“Atlanta airport—the busiest airport in the world, our largest hub—is the first airport in the US to roll this out,” Gil West, Delta Chief Operating Officer, told CNN. “It saves nine minutes on the ground for the boarding process which is time that our customers won’t be spending in line waiting to board the aircraft.”

Atlanta’s new system is optional, but skeptics are worried that facial recognition databases could face issues with a lack of oversight.

“Right now, there is very little federal law that provides any type of protections or limitations with respect to the use of biometrics in general and the use of facial recognition in particular,” Jeramie Scott, national security counsel for the Electronic Privacy Information Center, told The Washington Post.

“Facial recognition is much better from a security perspective than a paper barcode scan,” said John Selden, Atlanta airports general manager. “This technology is leading the way in improving security.”

Other airlines such as JetBlue, Southwest Airlines, and American Airlines have implemented trial facial recognition scanners for international boarding. The trend is likely to expand to domestic flights.

“[It’s the] next leap in airport security,” said Matt Cornelius, vice president of Airports Council International, North America. Cornelius noted that the technology “still has a lot of development to go.”

“If you do get rejected, all you do is present your passport and your boarding pass,” Wagner said.

Privacy issues remain for some. CBP says face IDs of US citizens scanned at airports are deleted from its database “shortly after confirmation.” According to the CBP website, for non-citizens arriving in the US, images can be kept for up to 75 years, but are deleted after 14 days from departure if the images and information are not needed.