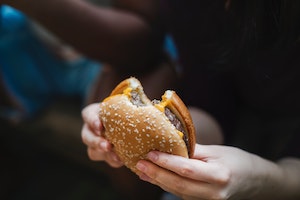 One Whopper, one penny

For the last week, Burger King sold Whoppers for one cent — so long as customers ordered them in the vicinity of a certain fast-food rival.

On Dec. 4, Burger King announced the “Whopper Detour,” which guaranteed customers the chain’s trademark burger for a penny under one condition: They had to order through the restaurant’s app while standing in or near a McDonald’s.

The app then gave them directions to the nearest Burger King and a great deal.

If BK’s goal was to boost downloads for its mobile app, it succeeded. During the promotion, its app catapulted from ninth to first in the App Store’s “Food and Drink” category.

Customers could only use the deal once. That means, according to Burger King’s numbers, more than 50,000 individuals ordered Whoppers within 600 feet of a McDonald’s over the past week.

That’s a pretty good troll. Ronald McDonald must be saltier than a large fry.

A Burger King executive insisted that, while the campaign was sassy, it wasn’t malicious. “We like bending the rules,” said Marcelo Pascoa, BK’s global head of brand marketing, “we like being edgy, we like being a challenger brand, but Burger King will never be a mean-spirited brand.”

According to Burger King, the promotion was a “tremendous success” — with the exception of an “isolated technical issue.”

The technical issue: A Los Angeles man was charged a whole lot more than a penny for his one-cent Whopper. Upon arriving at Burger King, having made his Whopper order outside a nearby McDonald’s, he was told the order couldn’t be found. He then purchased something else and returned home, only to discover that BK had charged him nearly $1,100 on his original Whopper order. Whoops.

For its part, Burger King confirmed the error and said it was working to resolve the problem.