A Day (or Two) in the Life of a Bitcoin Skeptic: Takaways from the Inside Bitcoins Conference in Las Vegas 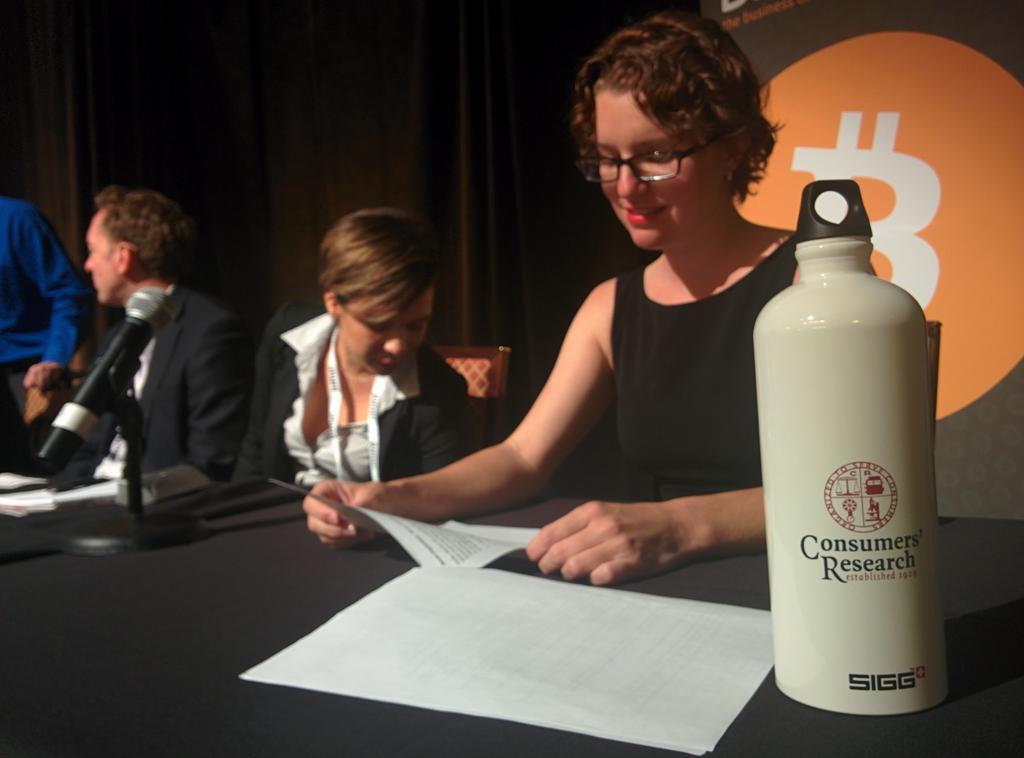 Typically, Consumers’ Research publishes articles written in a journalistic style, but every time I made it a few lines into writing this piece I bored myself to tears – something I refuse to do to our readers. Summarizing the Inside Bitcoins conference in a generic voice seems futile, since the conference agenda already does an excellent job of describing the various sessions of the conference.  Many of the presentations from the conference are available online and our Twitter feed (#BitcoinConf) captured quite a bit of the conference’s “quotables.” Therefore, I would rather focus on my personal experience at the conference and why it was transformative.

Inside Bitcoins is both a news site and series of world-wide conferences. The site and conferences discuss the latest insight into digital currencies and new payment technologies. Despite being held in the adult playground that is Las Vegas, the Inside Bitcoins conference was rather productive and – to my pleasant surprise – significantly more cogent than a recent Bitcoin conference held in the nation’s capital and the home of Consumers’ Research. I mention this other conference, not to belittle it, but to explain the source of my initial skepticism regarding Bitcoin.

Earlier this year I was introduced to Bitcoin – the protocol, the block chain, the cryptocurrency, and the controversy. By mid-year I had become well-versed in Bitcoin – its use as a currency, its non-currency applications (such as smart contracts and multi-signature transactions), and its reputation with regulators, policy makers, and the general public. I expected the conference I attended in Washington, D.C. (i.e. the home of regulation) to be heavily attended by those interested in the legislative implications of Bitcoin. Clearly, I have been living and working in Washington, D.C. for too long, because most of conference participants I spoke with actually seemed to be of quite the opposite mind and were uninterested in any outside regulation of Bitcoin. For those unfamiliar with Bitcoin, I say “outside regulation,” because Bitcoin is designed to be a transparent protocol with a public ledger that, barring any unforeseen security compromises, would not need regulation (which I will further explain below).

My experience at the conference in D.C. made me nervous that the vast majority of Bitcoin users and advocates were so opposed to regulation (of any kind) that they were willing to overlook important protections and safeguards Bitcoin cannot provide. However, the Inside Bitcoins conference in Las Vegas not only put greater emphasis on Bitcoin regulation in its programming, but conference’s attendees seemed to have a substantial interest in proactive and preemptive regulation. That’s not to say I did not come across attendees who were vehemently opposed to any regulation related to Bitcoin, but for the most part, I was relieved that participants seemed to want to embrace regulation designed to protect consumers and other users of Bitcoin.

Due to the nature of its public ledger (the block chain), Bitcoin is self-regulating to an extent. Attempts to alter the block chain once a transaction or action has been recorded would alter each subsequent transaction or action, which would be detected and corrected by the 8,000+ back-ups of block chain and its consensus algorithm. This feature of Bitcoin is certainly one of its most powerful assets in the eyes of regulators and policy makers alike; however, several regulatory concerns regarding the use of Bitcoin still remain unaddressed by the protocol itself. For example, many companies, products, services, and new technologies have been built on top of the Bitcoin protocol – all of which may be subject to the same perils faced by consumers, as well as traditional business and financial entities. There are also risks which are currently unique to Bitcoin, such as the lack of legal precedence or legal recourse (in some, but not all circumstances) in instances where an injustice occurred using the Bitcoin protocol.

At the Inside Bitcoins conference, I spoke on a panel that addressed “Emerging Issues in Regulatory Compliance and Law Enforcement Efforts.” The rest of the panel was comprised of brilliant legal minds who were all advocates of Bitcoin. The panel distilled regulation to a few key issues, namely that until Bitcoin’s volatility is steadied and user confidence is strong enough to encourage its regular use as a currency, exchange, and safe place to store value businesses and users will continue to rely on legacy financial institutions (which are required to follow regulations) to hold their capital/assets.

In this and other compliance/regulatory panels I attended, speakers focused on consumer protection, emphasizing the need to safeguard consumers from fraud, theft, corruption, security threats/breaches, hardware/mechanical failure, poorly designed or executed policies, etc. These kinds of protections are not even necessarily aimed at the Bitcoin protocol, but the entities that conduct business/commerce through the protocol or with cryptocurrencies. Trusting the Bitcoin protocol and the integrity of its public ledger is one thing, but trusting that no bad actors will abuse anonymity or the lack of legal recourse is quite another – a concept that seemed to resonate with a majority of speakers and participants alike.

The biggest takeaways I got from the conference were:

1)      Regulation is inevitable, but many of the best-respected Bitcoin businesses are already taking measures to follow parallel industry “best practices” and preemptively comply with whatever regulations they anticipate may affect their operations.

2)      The intellect and caliber of the people who are working toward bringing Bitcoin into mainstream use, acceptance, and understanding is truly impressive and reassuring. With these minds behind Bitcoin, I’m no longer skeptical it will thrive.