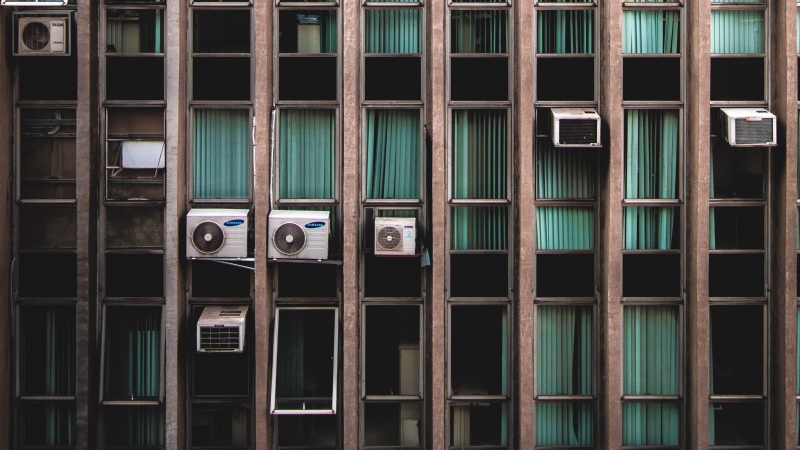 Published in the journal Nature Communications, the study’s authors, of the Karlsruhe Institute of Technology in Germany, explained the theory of how modified air-conditioning systems could remove carbon dioxide from the air and convert it into synthetic fuel.

According to the Nature Communications article, special filters within each air conditioning unit would extract carbon dioxide and water from the air rushing through the cooling system. Using various catalytic processes, the system would generate synthesis gas which could then be converted into synthetic hydrocarbon fuels.

“The synthesized hydrocarbon fuels can be stored and/or transported for further utilization,” said the study’s authors. “In this scenario the [carbon dioxide] emitted is again captured, finally allowing for a closed, net zero carbon cycle. When stored without further utilization even negative emissions can be realized.”

The researchers say they envision a future in which “buildings populated by humans will act like inhabited technical photosynthesis systems.” One of the study’s author’s, Roland Dittmeyer, recently told Mashable he plans on modifying the air conditioning unit of the laboratory where he works “to prove it can be done.”

Dittmeyer and his colleagues, however, do mention that the carbon-removal benefits of such a system would be meaningless if the air conditioners were powered by fossil fuels. To address this limitation, the authors recommend powering the machines with renewable electricity.

With carbon-scrubbing air conditioning, the researchers estimated that large skyscrapers, such as the Frankfurt Fair Tower, could remove up to 1.5 metric tons of carbon dioxide per hour and convert it into 2,000 to 4,000 tons of fuel each year.

Retrofitting the air conditioners would be no small task, however. Each unit would need miniaturized filters and components that are not yet available for consumer use.

Several oil companies have invested in carbon reduction initiatives that use similar processes to remove carbon dioxide from the air. One machine reported on by The New York Times creates synthetic fuel that is “clean burning — though expensive.”

A recent report from the Intergovernmental Panel on Climate Change suggested four methods to reduce the effects of climate change, all of which included some form of carbon removal.

But, according to Kate Gordon, a fellow at the Columbia Center of Global Energy Policy, extracting carbon from the air isn’t enough.

“Carbon dioxide removal alone cannot do it,” Gordon said. “If there’s one thing the IPCC report really underscores is that we need a portfolio — we need to reduce emissions dramatically, we need to come up with more renewable energy options to replace fossil fuels, we need to electrify a lot of things that are currently run on petroleum and then we need to do an enormous amount of carbon removal.”